We lost our little doggie, Cricket, this afternoon. I knew it would be hard, and it is. Just glad we could spend some years on this earth with her in our family. It's gonna take a while to get over it, I can see that right now.

My family has been through that and I know how bad it hurts.

Thanks, Dwight. We've been through it before too...I've known people that even stopped having dogs because of the pain of losing them. Once when the train derailed in our town, some tv news reporters were up from Knoxville and asking this ol' guy about how it tore up his truck...the guy was just bawling his eyes out, looked up and said..."Who cares about the truck...it killed my dog!"

Well anyway, we have our other two little doggies to lend their little paws to carry us through this. It's such a painful thing.

Oh Peggy, sorry to hear that. I know you have human family near, but those four legged family members really work their way into your heart, donât they? We went about three months before I was ready for another; my wife was looking for another about a week after we lost Jenny. Now that weâre all distancing, I am thankful every day that I was willing to get another before springtime (my arbitrary wait time). Iâm glad you have other pups to help you through this.

We lost our dog, Lucy, 2 years ago this month - still tear up at times thinking about her.

Sorry for your loss, Peggy.

Thanks, guys. I guess we've all been through it. The lucky ones have anyway. Dogs bring so much to the family, don't they?

We had to put down Ol' Smoke, our cat right around New Year's at age 17. He was hurting. I still see his shadow at the front door and turn to let him in/out/in/out. They make such a difference in our lives and then they're gone.

So sorry to hear Peggy.
Cat or dog, breaks a heart just the same.
Just opened up the shed to meet a new kitten. Here we go again. . .

Sorry to hear that. Our one dog is 12 years old and we know that he won't be around forever, even though he's still energetic. I tear up sometimes just thinking about it

Here’s my girls, Black Betty (bam-a-lam) who was the best dog ever, and Jenny Basenji who was the wildest sweetest dog ever. Peggy I think I’ve probably seen yours in a video, but if anyone wanted to share theirs... Dang it, I’m misting up already. 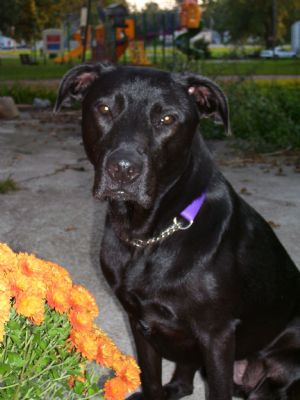 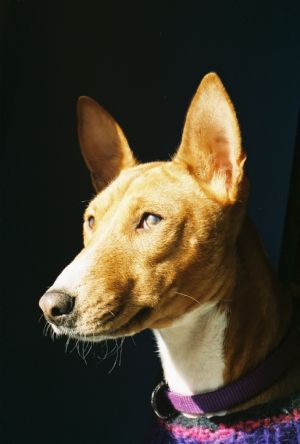 Sorry 'bout your doggie - and everybody else's. I still miss mine.

I think I remember seeing the black one, Chickenman. I don't think I know how to get photos on posts here or I'd put up one of Cricket.

Well I just found my photos on my page here and there is a photo of Cricket and Buttons sticking their heads through the fence...Cricket is the blond on the left. We still have Buttons and along the way, almost two years ago now, we picked up another one that looks a lot like Buttons, Taffy. Buttons and Taffy are helping us through the pain of losing Cricket. She was only 11 years old...she wandered in at 2 lbs as a puppy, we checked to see if we could find her family...couldn't...kept her...she had health problems from the beginning...and some special needs...but she was really a fun and interesting and very smart little doggie...one of a kind, for sure.

Peggy, you can attach the photo to your post so it'll be easier to see.
I'm so sorry to hear about Cricket. Our dog Lola (my avatar and constant companion, especially the last five or six years) died March 8th. She was a rescue dog and had been with us 131/2 years. I really miss her.

I feel for you Peggy, So sorry about Cricket.

About twelve years ago a little dog came to my front door asking for help. He had been abandoned, was starving, weak, very little hair, several hot spots and was just in very poor condition, near death. I sure felt sorry for the little guy and I decided to try and help. He was just a pup, not a puppy but he still had some growing left to do. Several days of care went by before I thought he would even live. But with some TLC and a couple of months he started looking pretty good.

We soon became best friends. He is red and I named him Mohawk because he has a streak of raised blonde hair right down the top of his head. We are all Injunâish here at home anyway so he fit right in the family theme of things. Many times I have looked back and realized that he was actually sent here to help me, not really the other way around like I originally thought. He is still in reasonable health for his age but I sure dread the lonesome day thatâs coming.

Sorry to hear about that Peggy. We've lost a dog & a cat in the last 6 months. It's never easy.

Wow, thanks guys. Sounds like we've all been going through it pretty recently. Randy, what you describe is exactly how we came to get Cricket in the family. She wandered in...2 lbs, sick puppy. The vet thought she wouldn't make it and didn't want to give her vaccines for a while. She surprised him by wanting to live. She did for 11 years. Couldn't go on anymore, but it was 11 years we all had to help each other through life in this world. 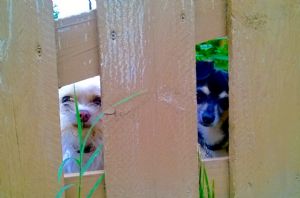 Oh thanks, Doug...I got the photo there...Cricket is the one on the left. We still have Buttons, there on the right...we got him later on, thinking Crickie would like a brother...then another one wandered in sick...Taffy...she looks a lot like Buttons...just got her almost two years ago. We all miss little Cricket...she was really a one-in-a-million character.

Cricket used to like to sit in my lap when I played my instruments. 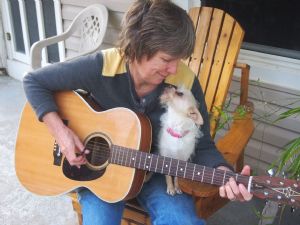 Cricket used to like to sit in my lap when I played my instruments.

Here's a picture of Lola on one of our rambles in the old days. She's probably wondering "When can we get going - there might be rabbits just ahead."

Sorry to hear that Peggy. Looks like she had a fantastic life. Makes me want a Terrier again they are such good characters. Hope you find another pal for Buttons.

No consolation, but here's a pic of our furry family at this point in time, Moss Gwen & Meg. 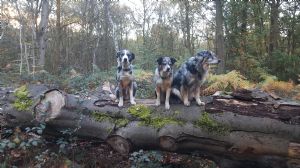 Beautiful dogs, guys. I love dogs...dogs are such good people, aren't they? We do have two dogs now, Taffy and Buttons. Taffy was fostered by our daughter, next door, I guess about a year ago...she looks just about like Buttons...shorter legs and heftier...she's probably a Pug-huahua. Anyhow, our daughter has big dogs and used to foster bigger dogs for a local organization. Then they called her about Taffy, who was a little bitty dog about to give birth and about to be put down in a kill-shelter they'd done some other pickups for in a county a ways down the road. The shelter was gonna put her down if the transport volunteers couldn't make a few quick calls and find somebody. So, our daughter said ok...doggie could stay on her enclosed porch since it was getting warm and have the puppies out there...away from her big dogs and she thought it might be educational for her son to see the puppies grow, etc.

Well anyhow, the transport people only got a few miles up the road before the dog was giving birth, not going well, and in distress. So they stopped in Lexington...found an ER animal hospital and she had emergency surgery...the puppies were too big and only one survived. So they took her straight out of surgery and to my daughter's house...so the puppy and Taffy were both pretty sick when they got there.

So, this is a long story...lol...we had Buttons and Cricket both at the time...so we agreed to take in Taffy and her little puppy here and there, when they'd go somewhere and have to leave them, etc. And it turned into more and more time, and they got to know our little dogs, and the puppy got adopted out pretty quick...the rest is history. We had a little Chihuahua club here we called Chihuahua Junction...three little doggies. Cricket was blind and disabled in a few ways, and the other two sorta helped her along.

I probably have a picture of all three of them, and maybe the puppy too, somewhere in my phone...I'll have to search one of these days and see if I can get it on here.

'These days, How many hours do you Fiddle a week?' 3 days