I discovered some discrepencies about Mr. Edmonds. Ancestry and his family tree list him as having been born in Carroll County, VA. Milliner-Koken and Rene Rodgers list Edmonds as having been from Wythe County, VA. Ms. Rodgers wrote an article about Mr. Edmonds, and presumably interviewed his grandson, Jimmy Edmonds, so perhaps this information came directly from him.

His death date gave me a bit of a headache as well. His family tree on Ancestry has his death as 1971. Social Security Death Index has his death listed as January 1972. Milliner-Koken say 1976. They are correct, as I located his death certificate, and his date of death was, indeed, 21 November 1976, in Wythe County, VA. Traditional Tune Archive lists his birth as 1899. Perhaps this is a typo, because all official documents list it is 1889.

According to Rodgers' article, Edmonds learned fiddle from his father, who in turn, learned from his father. He recorded four songs at the 1927 Bristol Sessions with J. P. Nester (banjo and vocals) in 1927: Train on the Island, Black-Eyed Susie, John My Lover, and Georgia. Their version of Train on the Island was included Anthology of American Folk Music by Harry Smith in 1952.

Only two sides of those recordings were released (Train on the Island and Black-Eyed Susie), but they were invited to New York City to record further, but Nester did not want to leave his home, and this never happened. Edmonds did, however, play on several records made in Galax, VA and had his own radio show called "The Old Timers." He also performed in later years at the Galax Old Fiddler's Convention.

Edmonds' grandson Jimmy Edmonds (Galax, VA) is a fifth generation fiddler who began playing at the age of four. He is also a luthier and learned from his father. (all above information from "Music in the Blood: Norman Edmonds and Jimmy Edmonds" by Rene Rodgers, February 9, 2018.

The source recording at the end of the video is courtesy Larry Warren, from his wonderful site Slippery Hill (Slippery-Hill.com) 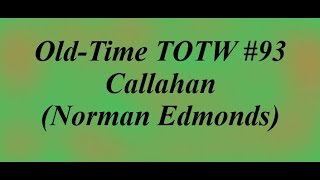 'Identity of W. Lewis violin with tag that has virtually no info. on it.' 16 hrs