Effie's paternal grandfather, John Smith, was a fiddler (known to his friends and locals as "Fiddler John"). He inspired Effie to teach herself fiddle at about the age of five. Effie's daughter Pauline remarked in an interview, "Her mom would tell her to do something, a chore of some kind, and she would get her fiddle, put it under her arm, you know, and go do the chore, too." She apparently did not want to leave her fiddle unattended, so her brothers and sisters wouldn't touch it.

Effie was an amazing woman who accomplished many things. According to her daughter Lillian, "She was a midwife, she was a musician, she was a mother, she was a wife, and she was a workhorse. She done everything there was to be done except drive a car. She could play anything that had a tune to it. If there wasn't a tune, she'd think one up. She was something else. There'll never be another her." Her daughter Pauline added, "She played anything, just about, that she picked up. Mom could play the fiddle, the mandolin, the guitar, banjo, harmonica, [and] the Jew's harp...She was always working. I donât know how she did everything she did, in a dayâs time. I donât know how she did it. It was daily routine, I guess. Everything just fell into place. She used to come out of the field and cook dinner and take it back to the work hands in a basket. Then sheâd go out and work in the fields, herself." Effie's daughters Lillian, Pauline, Ethel, and Beulah went on to be musicians. Effie broadcast on radio WLAP in Lexington with Lillian and Pauline, and made personal appearances throughout the region.

Effie was also quite the shot with a rifle. As the story goes, her aim was so accurate, she could shoot the eye out of an animal. Pauline said, âShe could shoot a chicken, [the bullet would] go in one eye, and come out the other eye. I saw her do it.â Often, as the story goes, she hit the target the men of her family were having difficulty striking. She was often the one to kill the deer, for the family. âThey ate it,â Pauline said. âShe didnât kill it just for the fun of it. She used to help kill the hogs and clean them, and things like that, too. She did everything, mom did, except drive a car.â She was a tough lady, Pauline remembered, who âused to chop wood, build fires in the stoveâ¦ and help dad saw the logs for the fireplace. She milked, she tended to all that stuff.â

All this, and still time and energy to play the fiddle and other instruments!

John Harrod, who visited the Piersons in the early 1980s recalled:

"Ed Pierson made these little folk toys, including this contraption... that Iâve never seen before. It wasâ¦ still blows my mind. One of these little balancing thingsâ¦ thereâs a whole category of balancing toys. He had this thing that consisted of two knife blades sticking at an angle out of a little piece of wood, kind of looked like a jet plane with wings. And there was a pin stuck in the end of it, and then there was another piece consisted of a pencil coming up out of some kind of toy tire, as a stand, and it had a pin sticking out of it. And that thing would balance on those two pins, that was the only point of contactâ¦ he could set that thing on there and it would balance like that. It was so weird it was almost spooky.â (all above quotes and information from an article by Anna Roberts-Gevalt in the Old-Time Hearald, Vol. 12, No. 5, and from Find a Grave, submitted by Carl Catherman)

In the recording from John Harrod, Effie is tuned close to a "415 A"--which is approximately 1/2 step below a "440 A" (which is what most people currently tune to). A415 is also known as a "Baroque A," and this is the A that early music ensembles generally tune to. One might not think that such a slight difference in pitch would make much difference, but I find that it makes the fiddle resonate very differently than tuning to A440--and very nicely, too, I might add. Many feel playing in cross A can be a bit shrill, but tuning to A415 gives a bright, but not strident sound. I deceided to tune to A415 for this recording. 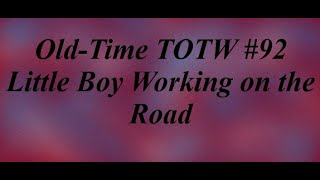 This one's going into my dance repertoire!

'Identity of W. Lewis violin with tag that has virtually no info. on it.' 17 hrs