I wanted to draw some attention to the real old style of fiddle known as Mountain Fiddling. This is pre-bluegrass, folks. I'm talkin' raw heart and soul in fiddling... not those show-boatin' young fiddlers you hear at Clifftop.

This band is called the Skillet Lickers and they are playing their wonderful tune, Rocky Pallet. They were real bluegrassers before any Johnny Cash-type Grand Old Opry hot-shots. 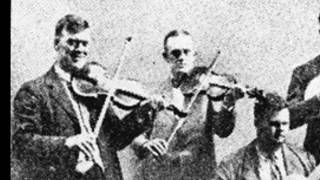 VIDEO: Before bluegrass, there was a rare style of fiddling played by these men...
(click to view)

Hey Jake--Good to see you here. I have enjoyed your playing and teaching on the web.

Thanks for posting your views; I appreciate them but not sure I see them all quite the same as you do. Your first statement under your u-tube --started with--"Before bluegrass was invented by singers like Johnny Cash--" I don't think so. You called Clayton McMichen-Mountain fiddler. Wikipedia says that he played old time,pop,and jazz.

Thanks for something to think about-Jake. I would encourage all to check Jake's u-tubes for some good music and instruction.

McMichen was born not far from Atlanta and played on radio in Atlanta, through the Midwest, and in Louisville, where he settled and retired. He died January 3,1970 in Battletown ,Ky about 20 miles south of where I am sitting right now. What part of his life made him a mountain fiddler?

What made him a mountain fiddler was that if you listen to Rocky Pallet (video posted above), you can hear he is playing the mountain style which is closer to the old Irish way of fiddling than the bluegrass style, which was popularized by artists like Johnny Cash.

Ok, the closest Johnny Cash got to bluegrass is singing will the circle be unbroken with the nitty gritty dirt band. Bill Monroe, Flatt and Scruggs, the Osborne brothers, JD Crowe and the new south, new grass revival, etc. all did way more to popularize bluegrass because they actually did bluegrass.
Also, is that video supposed to be what sounds like a keyboard playing on banjo voice? Cuz that's what it sounded like, it was definitely not a real fiddle

Some people fail to understand the absolute seriousness of this post and its accompanying video. Thank you for posting some real mountain fiddle. I haven't heard such an old-school take on that tune in a long time. Johnny Cash never lived up to this raw music.

What about this old timer Jake? "Manco Sneed"

You are not doing old time any favors with these videos. Maybe share them on the Banjo Hangout. You clearly can play, why not stick to what you do best and leave the "comedy" to someone who is funny.

Hey Jake
Please don't take any of this personal. It's a good discussion and thanks for your opinion.

I still think that Johnny Cash had O influence on the development of bluegrass, not a factor at all. I still don't see the connection.

The other fiddler is Gid Tanner,a great all-around -fiddler, also from around Atlanta.

Both were great contest fiddlers and could play many styles well, but I still would not consider either mountain fiddlers in the vain of Appalachian musicans. McMichen had a Dixie Land band the last five years of his professional career.

I think there are several contradictions in your post (which was pretty strong for a first post imo but I digress.)

First, the Skillet Lickers were from Georgia were they not? I know Georgia includes the tail end of the Appalachians but I would consider it more of the Deep South than the heart of the mountains.
Secondly, I thought it was exactly this kind of music that they played at Clifftop and that's what set this festival apart? Sure, no one may sound exactly like Clayton McMihen or Lowe Stokes, but they're still playing these tunes from the old Skillet Lickers records and other, what I would call actual "mountain" fiddlers such as Salyer, Hammons, Jarrell (of course), and many others. Play these guys' tunes and keep them alive, but trying to sound exactly like any one of them is pointless. Play them with respect, but make them sound as you think they should. If you consider that "show-boating" then you have my condolences.
Third, if Johnny Cash is Bluegrass then Mr. Kenny Baker and Bobby Hicks are Old-Time

Something else I'd like add is just about how we fiddlers treat each other. Yes, Bluegrass is not Old-Time, nor is Old-Time Bluegrass. Yet they share tunes, artists, songs, instrumentation techniques and even the same geographical birthplaces. You could sit here all day and point out how similar, dissimilar, or better they are, but in reality, it doesn't make me want to play either one more or less. Trying to drum up support for the superiority of Old-Time as opposed to other genres by smearing them is rather pointless on this forum as most members seem to be both Old-Time players already, and too respectful of fiddlers to put up with that. I've played mostly Old-Time for a while now, but I enjoy dabbling in many styles. I think any fiddler would be done some good by exploring.

Your mileage may vary,

Honestly with an audio clip like that, I can't tell whether this is meant to be taken seriously at all.

Well i feel strongly i should say something. I don't know what, but the need is still quite strong. The feeling, that is. But y'know i do know when to hush up. As a kid i nearly starved to death. I wouldn't tell my folks i was hungry. So if there's one person that knows how to hush up, it's me.

J. R. Cash was such a poor fiddler, he had to play O.B.S. on harmonicas.
Merle Haggard, on the other hand, could play.

Johnny Cash isn't really a bluegrass artist at all. And being a bluegrass fiddler and a "mountain" fiddler are two very different things. They both have their place, but probably best not to confuse them

'Playing 'tight' with another fiddler' 7 hrs

'Tim the Turncoat take one' 1 day