Please note this is an archived topic, so it is locked and unable to be replied to. You may, however, start a new topic and refer to this topic with a link: http://www.fiddlehangout.com/archive/55239

Roberts learned to play fiddle at a young age with help from his older brother, Liebert. Their mentor was a black fiddler named Owen Walker (March 1857--29 October 1944). Walker was the son of Squire Walker (1830-1900) and Elizabeth "Betsy" Parrish (1835-1917). Walker was in the restaurant business, and in the 1920 Census is listed as an owner of "Pool Rooms." In the 1930 Census, he was listed as a brick mason, and he continued this profession. Walker may have gotten into bricklaying through his son-in-law, Tom Sampson, as Sampson is listed in the 1920 Census as being a bricklayer. (source for above, Ancestry and Census records)

The next two paragraphs are extracted directly from Wikipedia:

In 1925, a talent scout, Dennis Taylor, recruited Roberts along with Welby Toomey and Edgar Boaz as old time recording artists for Gennett Records. In early 1927, Roberts recorded with the string band, the "Booker Family". Together with Dick Parman and Ted Chestnut, he formed the Kentucky Thorobreds. They recorded in April 1927 for the Paramount label.

In the fall of 1927, he formed a duo with Asa Martin called Martin & Roberts.They made their recording debut in May 1928 for the Gennett label. Between 1927 and 1934, the duo performed at fiddler's conventions, in schoolhouses, on vaudeville stages, and on radio (WHAS in Louisville, Kentucky). Martin & Roberts recorded altogether more than 200 sides on 11 different labels. Later on, with the addition of Doc Roberts' son James, the Fiddlin' Doc Roberts Trio was formed. In 1928, Roberts was hired, through the agency of Bradley Kincaid, by the National Barn Dance radio show in Chicago. He was paid $50 a week. After only two weeks he quit the show and moved back to Kentucky. The reason was that he was unable to sleep due to the noise of the big city. The Doc Roberts Trio lasted until 1934 when Roberts retired as a recording artist. During the next 4 decades, he continued to make personal appearances and occasional radio works.

The folk revival of the 1960s created interest in Roberts' fiddling, but by then he pretty much had given up fiddling. He did, however, perform at Berea College in 1974. After his death, a acetate recording made in his home in 1954 was doneted to Berea College by his son James (information gleaned from Find-A-Grave)

Regarding the tune, Traditional Tune Archive states that it is an American version of the Irish reel known as âOver the Moor to Maggie." The following is extracted directly from TTA:

The tune is most often seen as âWaynesboro,â and Waynesburg is the name of towns in both Kentucky and Ohio, Jeff Titon {2001} also finds Waynesburghs in Illinois, Georgia, Mississippi, Pennsylvania, Tennessee and Virginia. Titon finds that the tune was played by five different fiddlers at the 1919 and 1920 Berea, KY, fiddle contests, making it one of the most popular tunes of the contests. It was in the repertoire of West Virginia fiddler Edden Hammons. Mike Yates (2001) points out that some of Edden's ancestors came originally from Knox and Whitley Counties in eastern KY, not too far from Madison County, and he speculates that some of the Hammons family tunes may have originated in that part of the mountains. Mike also says, âDarley Faulks (b.1895), yet another eastern Kentucky fiddle-player, commented that his version of Waynesboro, which he called Andrew Jackson (possibly after General Andrew Jackson, 1767 - 1845, seventh President of the USA), had been played by both his grandfather and uncle and that the tune was well known long before Doc Roberts made his recording.â Wolfe County, Kentucky, fiddler Darley Fulks' reel "Andrew Jackson" is a version of "Waynesburgh." See also the related tunes "Ladies in the Ballroom," "Coming Down from Denver," "Gerald's Favorite," "Here and There ," "Long John."

I wish to thank Stephen Rapp (banjo) and Sean Fen (guitar) for recording this tune with me, summer 2020.

I will be teaching the tune Hell and Scissors at a remote workshop for Black Creek Fiddler's Reunion on Sat May 29 at 2pm. FiddlerPaul71@gmail.com for information. Register at blackcreek.oldsongs.org/ 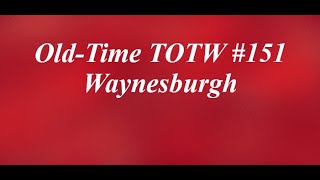 'Another win for Strum Machine' 16 hrs