Please note this is an archived topic, so it is locked and unable to be replied to. You may, however, start a new topic and refer to this topic with a link: http://www.fiddlehangout.com/archive/54868

Iâm pretty naive when it comes to violins and what fiddlers are playing. I know the classical folks seem to jump into the higher priced instruments ($5k, $10k, and up) pretty quickly as they progress. Do fiddlers buy the expensive violins, too? (Iâm sure some do, lol. If you have disposable income, you tend to spend it!)

Just curious. In the guitar/mandolin world, itâs pretty easy to see what folks are playing and the kind of dollar value the instruments have. Not so much in the violin world!

(One big difference that Iâm seeing in the violin world vs the mandolin world in which Iâve been immersed for the past three years is that there are a LOT of used violins out there, and many seem to be decent instruments for reasonable prices. I can see that there might be less of a need to spend the high dollars to still get a very good violin.)

That's really another fine point to fiddling. They don't have headstock to which one can paste a brand. Making it all the more about how you sound than your ax. And rightly so.

Last week I was privileged to jam with a very brand oriented couple. "Taylor, this. Fender that. Blah, blah, blah." Granted, they both could play. But it was one less conversation with me, because especially from a distance, fiddles sort of look alike.

Meanwhile, I've played a 50k instrument that really did not look the part. You could hide it between two 3k instruments and unless you knew it previously, you'd be hard pressed to pick it out visually. However, it did sound pretty good. I don't know if it was 50k good because I'm not a 50k player.

Play as many as you can. I played two $80 fiddles, one was pretty fair, the other sucked. The more one tests, the odds shorten to find that fiddle that "punches above it's weight-class." Also consider the sum of the total: fiddle, strings, bridge, bow, rosin, setup, player,etc.

Lastly, if you're comparing tone/sound, don't rely on memory. Trust me, it can save a ton to bring what you're playing with you when shopping.

To answer your question, I've only spent more than $500 on a fiddle one time.

For many years I lived in the part of L.A. where most of the major movie studios were. Because of this, there was no shortage of high-end musical instrument stores. After all, movies demand music and music demands musicians with the ability to deliver it.

Anyway, I'd drive the stores crazy by asking them to pull out better-than-my-ability fiddles for me to "test." It didn't hurt that I looked "distinguished enough" for them to think I could really afford them.

I never got up the nerve to ask to test instruments above the low five figure mark, but I did try some instruments with sound quality that truly gave me the shakes (which ain't good for proper bow control). There was a mellow, lovely-sounding fiddle made in the 1870's by a noted luthier in Boston (can't remember the guy's name). There was a gorgeous, blonde fiddle with sparkling, "Here I am" tone made in 1920's Berlin by a guy named Otto. That fiddle still haunts me.

Anyway, the guy who owned the shop gently convinced me that the fiddle I previously bought at the place, a 21st Century built Bernd Dimbath shop fiddle, was top notch and that I should just be happy with it. I got to say, too, that several years down the road, I'm happy as heck with that Dimbath. Pretty to look at. Plenty of volume.

It's really hard to tell if people have expensive fiddles. Fiddles are so anonymous. People who play fiddle tend not to be people who talk about fiddle brand names like guitarists and mandolinists who seem obsessed with all that. I have no idea what kind of fiddle I have. There are labels inside but I've been told they're fake labels.

One guy I'd call a friend won the Masters contest in Nashville a few years' back, playing a $25 fiddle. OTOH, I've sold fiddles approaching $10,000 to players who could play them $10,000 worth. Another one plays a David Burgess instrument. But usually, even pro fiddlers can find something that works for them for 2-3 thousand, especially if they play on stage, where finesse isn't a great issue. One of my biggest successes was when a Nashville player who had been playing a well known maker's expensive violin for a long time and looking for "just the right fiddle" for nine years flat fell in love with one of my $1800 Westport fiddles, designed for semi-pro fiddlers. I'm working with another guy who's got a great ear and really wants and can use upper-range performance, but I'm trying to find something that fits his budget.

A local violin shop near me put a lot of work into their website so one can hear the difference between different violins of various makes and prices.

Here's a link to their site.

I think we have the same violin. I have the same two labels except with different dates. 1733 Amati and 1881 repair. I don't have a label saying anything about when/where/by whom it was made.

sbhikes2 -- Yeah, it's entirely possible that our two fiddles came from the same factory at about the same time. And that both wound up in a shipment that wended its way across the Atlantic. How 'bout that???? Cosmic convergence. Then again, if your Vie Oh Lynn doesn't want to to play Soldier's Joy or Greasy Coat...all bets are off.

There are fiddlers who play expensive instruments. Bruce Molsky has a Bruno Stefanini. Mark OâConnor has a Vuillaume.

As far as knowing about other playersâ instruments, thatâs one area where violinists and fiddlers tend to differ. Fiddlers often donât know or care what their colleagues play, and thereâs a good chance they wonât know much about their own instruments. Violinists tend to pay very close attention to those things. When a player buys or sells a violin, everyone talks about it. Although prices arenât always public knowledge, violinists are always trying to find out how much someone paid. The higher the level of the group, the greater the urge to have pedigreed instruments.

I've been searching for the holy grail fiddle, one with the magic sound since I started playing 9 years ago. Most of the fiddles I now own were picked up at local flea markets for less than $150, that includes one for $25. I'm kinda' a tinkerer - which means willing to do minor repair jobs like front plate cracks, new pegs, bridge fits etc. All this has resulted in some pretty nice sounding fiddles when everything gets done. I guess all this says there are a lot of good fiddles out there for relatively little cash outlay if you are willing/able to do a little fix up work. I'll also admit I don't care much for pretty fiddles, it's strictly the sound coming out that matters. But, then here's something else everyone needs to consider in the "how much should I spend for a fiddle" business. A good fiddlers make ANY fiddle sound good and can make a good fiddles sound fantastic. So, keep in mind how it sounds when someone else plays it may not be the same as when you do.

I know people like that who scour craigslist and garage sales for old broken fiddles and fix them up. Sometimes you get a good one, sometimes not. My friend has done it enough he fixed my fiddle when it came apart. Glued it back together with hide glue. He also made a fiddle with a viola body that sounded really good and he stained one with what looked like almost a purple cabernet wine color that I coveted just for the cool color. I found my fiddle on craigslist. I saw the ad and figured the guy selling it was a liar (said his grandfather played it at Juilliard, yeah right) but my friend alerted me to it and said he went to play it (he has a hobby of playing the fiddles he sees on craigslist) and said it sounded great and I'd probably like it a lot. So I bought it.

Look these two videos: one is played on a 15k viola crafted by a well known italian luthier, the other is played on an old violin (1927 says the label) I had from my aunt, when I asked a luthier for its value he told me 1k is enough! 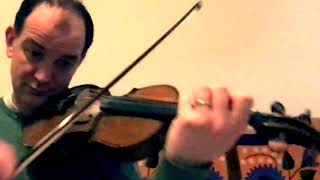 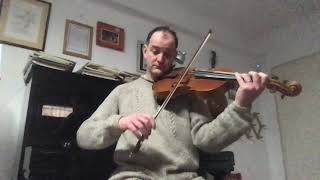 VIDEO: I will walk with you one day (Paul Sinclair)
(click to view)

Finding fiddles is pretty easy, there just seems to be a bunch around... now, if I could find really good bows that would make my day...

I know people like that who scour craigslist and garage sales for old broken fiddles and fix them up. Sometimes you get a good one, sometimes not.

Absolutely true. When you buy a flea mkt special you have no idea what your gonna end up with. Sometime the grain patten on the back plate or tightness of the spruce grain on the front can be helpful. But, in the end your buying a lottery ticket with low chances of coming up with a big winner. Still, if the layout price is low enough and you do th work yourself there's the satisfaction of getting a poor cast off fiddle singing again.

I bought a used fiddle on a local classifieds site for about $300. I'll probably never pay more for a fiddle. All I know is that it was made in a factory in Eastern Europe before 1990. It sounds good to me.

I have several others ranging from free to $100. They all sound fine, and were MUCH better after my luthier set them up.

'Dominants are they really as...' 2 days