Please note this is an archived topic, so it is locked and unable to be replied to. You may, however, start a new topic and refer to this topic with a link: http://www.fiddlehangout.com/archive/54554

This week's tune is Hell's Broke Loose in Georgia from the playing of the Skillet Lickers of Atlanta, GA.

Gid Tanner formed The Skillet Lickers in 1926. Between 1926 and 1931 they recorded 88 sides for Columbia records. Eighty-two of these were commercially issued. They disbanded in 1931, but reformed for occasional recordings after a couple of years with a changing line-up. The Skillet Lickers, helped make Atlanta and North Georgia an early center of old-time string band music, especially the hard-driving fiddle-based style employed by them.

The recording of Hell's Broke Loose in Georgia was released in 1929. Listed on the record label are Gid Tanner, Riley Puckett, and Clayton McMichen.

"The title perhaps dates to the gold rush in Georgia before the settlement of Gordon County in 1850 (approx. c. 1830). There are three distinct fiddle tunes that have been identified with this title. The tune was used in 1899 in a Gallatin Tenn. fiddle contest as a category tune - each fiddler played a version, with the best version winning a prize (all fiddlers playing a rendition of the same commonly known tune was formerly a common way of structuring fiddle contests) [C.Wolfe, The Devil's Box, vol. 14, No.4, 12/1/80]. Cauthen (1990) finds reference to a Georgia fiddler, Ben Smith, who served with the 12th Alabama Infantry in the Civil War, and was known to have played the tune in that conflict. She also cites A.B. Moore in his History of Alabama (1934) who said it was one of the standard tunes in the square dance fiddler's repertoire. The melody "Streak O' Lean Streak O' Fat" is related"

Check out the great benefits I have on my Patreon at: patreon.com/paulkirk 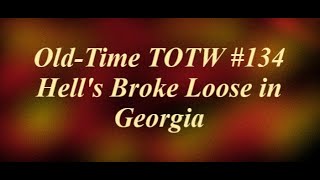