Please note this is an archived topic, so it is locked and unable to be replied to. You may, however, start a new topic and refer to this topic with a link: http://www.fiddlehangout.com/archive/54343

This week's tune is a version of Lost Indian from the playing of Alexander Campbell "Eck" Robertson (20 November 1886--15 February 1975) of Hutchinson County, TX. He was born in Madison Co., AR, and was the son of James Leander Robertson (1852-1935) and Mary Jane Reed (1857-1939). He married Jeanetta Belle "Nettie" Levy in 1906. Some sources list Robertson's birth year as 1887, such as his birth certificate recertified in 1943) and his draft registration. (source: Ancestry and public documents)

When Eck was three, his family moved to Texas. His father, uncles, and grandfather were all fiddlers, and he built his first fiddle from a long necked gourd when he was five years old. He also learned to play banjo and guitar, and at age sixteen left home to become a professional musician, joining traveling shows in OK and TX.

In June of 1922, Eck and his fiddling friend Henry C. Gilliland traveled to New York City with the hopes of making a recording. The Victor Talking Machine Company recorded them playing Arkansas Traveler and Turkey in the Straw on June 30, and on July 1 Victor recorded just Eck playing Sallie Gooden and Ragtime Annie. Robertson became one of the most popular country music artists and holds the distincction for being the first person to record a commercial country music record along with Henry C. Gilliland. He made more recordings in 1929 and 1930 (some were not issued), but this time with his wife Nettie on guitar, daughter Daphne on tenor guitar and son Dueron on tenor banjo. In September1940, Robertson recorded 100 fiddle tunes at Jack Sellers Studios in Dallas, Texas. There is no existing list from these sessions, and none of the tunes have ever surfaced.

Eck and his wife Nettie competed in fiddle contests, performed in Vaudeville shows, and tuned pianos with the Total-Line Music Company.

Robertson was billed as the "World's Famous Cowboy Fiddler.â Advertisements for his shows referred to him as a âVictor Record and Radio Artist,â and mentioned âOld Time Melodies, Trick and Stunt Fiddling, Singing and Dancing.â Eck turned somersaults while playing his fiddle, played it behind his back, and could toss the instrument into the air during a song and catch it without missing a beat.

Eck Robertson played for over eighty years in a career that spanned from musicâs earliest recordings to a performance at the Newport Folk Festival in 1965. Heâs considered one of the greatest folk fiddlers of all time, and is one of the originators of Texas-style fiddling. While he was already recognized nationally in the Country Music Hall of Fame, Eck was inducted into the Texas Country Music Association Hall of Fame on October 25th, 2002 along with Moe Bandy and Joe Stampley. The ceremony took place at the VFW Hall in Annaville, Texas. His great-nephews, Julius Petrus Jr. and Keith Petrus accepted the award on his behalf. His gravestone is inscribed, âWorld Champion Fiddle Player.â

Above information from Eck's obituary, Wikipedia, and an article written by his great-nephew, Keith Petrus. Make sure you check that article out for added information and photos: ckpetrus.com/petrus/eckrobertsoninfo.html

This version of Lost Indian is very much like Sandy River and Going Down the River. It also shows similarities to the tune Little Dutch Girl notated by Marion Thede from the playing of W. S. Collins. (not the same as the tune that now goes by the name "Little Dutch Girl.") Apparently, that last mentioned melody was once known as "Liza Jane" and also appears in Thede's book, notated from the playing of Joe Wilsie from Cherokee County, OK.

You can join my Patreon at: patreon.com/paulkirk
Your membership and support helps me continue to bring you Old-Time TOTW.

In conjunction with this article, Mike asked me to make a lesson video for this Old-Time TOTW. That can be found here: youtu.be/DezuXN3mEao

Next week we will have a very special collaboration video with some friends overseas...Stay Tuned! 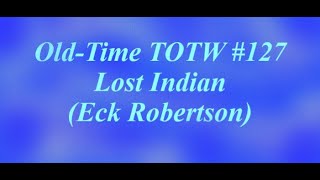 The lesson was really good. I love how you describe and play the Nashville shuffle...it's the way I've heard it done a lot and the way I (try to) play it, or at least the way I think of it. Love those pulses on the long notes of the B part too. Thanks for sharing!

Thank you kindly, Peggy, glad you enjoyed them!