Please note this is an archived topic, so it is locked and unable to be replied to. You may, however, start a new topic and refer to this topic with a link: http://www.fiddlehangout.com/archive/53845

Walter is listed in the 1900 Census as a farm laborer, but by the 1920s was working as a carpenter.

The Walter Family band consisted of Draper Walter (fiddle), Mary Walter (piano), Ray Agee (banjo), Charlie Estes (guitar), Wilburn Burdette (wash board), and Charlie Burdette (jug?). The tune was recorded by Gennett Records on 29 March 1933. This information comes from 53jaybop on YouTube. The piano player was Draper's wife, and his son-in-law played banjo. The other members were related as well. Apparently, it is a very rare record, as only 108 copies were sold in 1933. (stated by ogeerg on YouTube)

Gennett Records was founded in Richmond, Indiana, by the Starr Piano Company. It released its first records in October 1917. The company took its name from its top managers: Harry, Fred, and Clarence Gennett. Earlier, the company had produced recordings under the Starr Records label. From 1925 to 1934, Gennett released recordings by hundreds of "old-time music" artists, precursors to country music, including such artists as Doc Roberts and Gene Autry. By the late 1920s, Gennett was pressing records for more than 25 labels worldwide, including budget disks for the Sears catalog. In 1926, Fred Gennett created Champion Records as a budget label for tunes previously released on Gennett. The Gennett Company was hit severely by the Great Depression in 1930. It cut back on record recording and production until it was halted altogether in 1934. (above information on Gennett Records taken directly from Wikipedia)

The 1933 recording is found on the CD "Kentucky Mountain Music, part 1." (2003) Larry Warren includes a bit of the recording on his site: slippery-hill.com/recording/th...caught-it. The tune was transcribed by Claire Milliner and Walt Koken in their monumental book The Milliner-Koken Collection of American Fiddle Tunes.

I recorded a second fiddle part and added it to the audio track. In my opinion, many Old-Time fiddle tunes don't work well with a lot of harmony, but That's My Rabbit, My Dog Caught It is an exception. The very melodic A part just cries out for harmony on those long held notes, and the whole line harmonizes very well. The B part contrasts nicely with the A part, being strongly based on groove and drive. 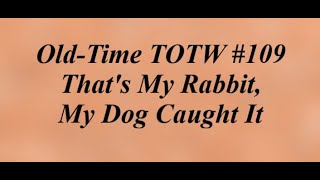 Sounds so good, Paul! That's another one of those tunes you just feel like oughta be played all day long...lol. Nice fiddling and your banjo player and guitar player sound good too, as always!