Please note this is an archived topic, so it is locked and unable to be replied to. You may, however, start a new topic and refer to this topic with a link: http://www.fiddlehangout.com/archive/53699

For generations, the Carpenter family was known for their musical ability. French learned most of his music directly from his father, Tom, a fiddling preacher, and Tom had learned from his father, Solly "Devil Sol" Carpenter. Sol is said to have been a very influential fiddler, and gained his freedom from a Union prision during the Civil War for his rendition of a tune that is now known as Camp Chase. More on that in a future installment of Old-TIme TOTW when we feature that tune.


Thie tune has been described as "an old bagpipe tune, " and Carpenter claimed his ancestor (the Elzic or Elzick of the title) played the melody as a farewell before going to fight in the Civil War. Wilson Douglas, who was distantly related to French Carpenter (his grandfather and Carpenter's father were half-brothers), thought that Elzic was from Wood County, WV. The tune's origins have been researched by Jim Comstock of Richwood, WV, and were published by him in the West Virginia Songbag (1974). Comstock says the tune was written by Harvey G. Elswick (more about him in a moment). Elswick fought in the Civil War, after which he returend to Pike County. In 1875 he and his family moved to Kanawha County, WV, to live on 80 acres in Malden and Elk districts, and it was there that he wrote the melody now known as Elzic's Farewell, in April 1889. Comstock cites the research of a descendent, Rev. Albert Elswick of Wallkill, NY, which states that Harvey Elswick played the tune at the request of his mother on her deathbed. (source for this paragraph of information: Traditional Tune Archive)

There seems to be many different interpretations of the tune, which can include up to four parts. French Carpenter's recording includes two parts: slippery-hill.com/recording/el...farewell. For our recording, we played four parts.

Joining me here is Stephen Rapp on banjo (Kent, OH). 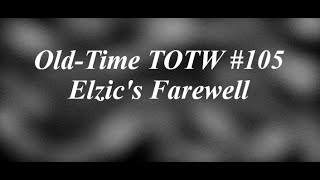 One of the additional parts comes from Doc White, though Doc also plays the ending of one the Carpenter parts differently, and one part, I believe, was made up by Sandy Stark (recorded by Primitive Characters, 1997).

Send me a message if you'd like to hear the Doc White version.

Thanks, Peggy! Hope you are doing well.

Thanks Paul. Hope you all are too.

'Okay, Teacher types, How do you train to hear a chord change?' 1 day

'Have you seen these fiddlers?' 1 day