Please note this is an archived topic, so it is locked and unable to be replied to. You may, however, start a new topic and refer to this topic with a link: http://www.fiddlehangout.com/archive/53520

Sarah Elizabeth Gray was the daughter of Charles Henery [sic] Gray (1863-1941) and Julia Custer/Kuster (1866-1920). Sarah's family had been in Pennsylvania since the mid-18th century. John Dixon, her gr-gr-great grandfather on her father's side, was born about 1690 in Scotland. It is not certain when he came to the U.S., but he died in Cumberland Co., PA in 1760. (source: Ancestry.com)

Sarah came from a musical family.  Many family members, including her father and his brothers, played instruments. Young Sarah began playing fiddle at the age of five. She also took up the cello at some point in her life, and often accompanied other family members for dances. Though Sarah's son and daughter accompanied her (on guitar and piano, respectively), neither of them continued her tradition of passing on the family's tunes.  Sarah obviously thought very highly of her Uncle Laney (George Laney Gray, born in June 1859). She was so influenced by him and his fiddling that later in life she composed two tunes (that we know of) in his honor: "Laney Tunin' His Fiddle" and "Dream Song."

Of the latter tune, Bayard states:

"[Dream Song was] composed by the player [Sarah Armstrong], and demonstrate[s] that the making of melodies is not yet quite dead in Pennsylvania. [Dream Song] was heard in a dream--a modern record of an experience often narrated in the past, except that in earlier times the inspiration of the melody was apt to be attributed to the fairies or some other supernatural agency. In this case, Mrs. Armstrong relates that she dreamed of seeing her Uncle Laney--the most accomplished fiddler in the family--sitting on a log in a clearing and playing this air on his violin. The tune impressed her so by its wistful quality that she recalled it when awake; so she at once tried it out on her fiddle and committed it to memory. The tune itself, it may be noted, is very much in the style of a British folk melody."

Bayard transcribed the tune on November 18, 1943 directly from Sarah's playing. He gives no indication of when she actually composed it, but, thankfully, mentions it is an air with a "wistful quality." That gives indication that it was intended to be played somewhat slowly and smoothly.

The tune as transcribed by Bayard is a single-line melody, but I added drones and harmony parts to it. I began with the drones to accentuate her Scottish ancestry, and from that it grows in intensity and leads the listener to a gentle three part arrangement that is very reminiscent of a hymn. In the fourth turn of the tune, I prominently featured the viola (tuned an octave below a fiddle GDAE) because it sounds very much like a cello. This was to acknowledge and honor that Sarah played the cello. The final turn of the tune returns to the arrangement in three-part harmony. I hope she would be pleased with my interpretation of her lovely melody.

Contact me at FiddlerPaul71@gmail.com to inquire about remote private lessons and workshops that focus on the Old-Time TOTW series. 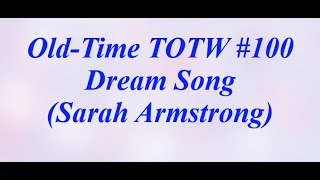 Such an awesome tune and so very well played by you Paul!

Thank you, Loy. It was fun putting this one together to honor Ms. Armstrong and her Uncle Laney.

That's absolutely beautiful, Paul! You're making very good use of that viola! I love it.

You and the rest of the trio may have to take it on the road.

That's absolutely beautiful, Paul! You're making very good use of that viola! I love it.

'Hi! new here, What are some good cheap options for a beginner?' 1 day