Please note this is an archived topic, so it is locked and unable to be replied to. You may, however, start a new topic and refer to this topic with a link: http://www.fiddlehangout.com/archive/53485

John Salyer was heavily influenced by his close neighbor, and later musical partner, Willie Fletcher (b. 1871). He learned many of his tunes from Fletcher and said him to be "the sweetest and smoothest fiddler I ever heard." His son Grover recalled "He [John Salyer] played for a lot of dances...I've seen him...playing for a hoedown dance and he'd jump up and dance and play the fiddle at the same time." Another fiddler friend of John's was William Hamilton Stepp (1875-1957). Several tunes that Stepp and Salyer played in common are remarkably similar, and it's very possible that they learned some tunes from each other. Salyer's son Glen said of Stepp, "I liked to hear him play. He was considered a good fiddler, and he was. He loved to entertain people...more than Dad did." There were fiddle contests now and then in the Magoffin area, but Salyer rarely participated in them. (source: routyrock, Ancestry.com, posted 6 October, 2009)

Salyer often played in cross tuning ("wildcat keys" as they were called), and employed the use of what he called "wild notes" (these days people call them "neutral thirds.") He is probably best known for his interesting crooked tunes. Jeff Sturgeon is no exception. I find this tune utterly fascinating with its irregular first and third sections (4 1/2 measures and 5 1/2 measures, respectively) with a square, four measure middle section that plays with mixolydian tonality.

Jeff Titon (Old-Time Kentucky Fiddle Tunes, 2001) says Salyer learned Jeff Sturgeon from Bob Johnson of Johnson County, KY, and that Jeff Sturgeon taught Johnson how to play fiddle. He notes this information came from personal communication through Bruce Greene. It is a rare, local tune whose only source is Salyer. His sons Glen and Grover recorded Salyer playing the tune in December 1941 (source: Titon)

Here, I am playing the tune on a viola tuned to AEAE, an octave below fiddle. The usual tuning for viola is CGDA (the G, D, and A would be the same pitches as the three lowest strings on a fiddle). I'm not using octave strings here; I just have the instrument tuned very low. This particular viola responds well to low tuning, in part, I'm sure, due to its large body size (which is about 16 3/4").

Contact me at FiddlerPaul71@gmail.com to inquire about remote private lessons and workshops that focus on the Old-Time TOTW series.

Next week we will celebrate Old-Time TOTW #100 with a special collaboration video...see you then! 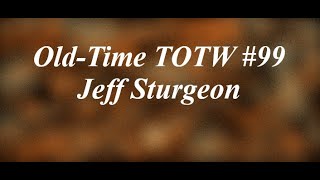