Please note this is an archived topic, so it is locked and unable to be replied to. You may, however, start a new topic and refer to this topic with a link: http://www.fiddlehangout.com/archive/53454

This week's tune is Molly Baker from the playing of Joe Crane of Marshall County, OK. The tune was collected by Marion Thede and is found in The Fiddle Book (page 90) where she gives the alternate title "Big Tater."

This is the first time I was not able to find anything about the source fiddler for a tune featured in my Old-Time TOTW series. Searching on Ancestry, I found that there were several men by the name Joe Crane in Oklahoma that could be him. One surely is, but without having any clue to go on regarding his age or other places/counties in which he may have lived, I would be completely guessing if I were to decide which one is our fiddler in question. Thede lists him as being in Marshall County, OK, but none of the men named Joe Crane on Ancestry were in that county. If anybody has any definitive information about Joe Crane (even a birth/death year would help), please let me know.


Thede gives some lyrics to the tune, presumably sung by Mr. Crane:

Knife and a fork and a great big tater
Take that pretty girl to be my waiter.

I had a wife and she was a Quaker
If she went to sleep the devil couldn't wake her.


Thede gives a bit of insight into the performing of the tunes:

These are one-fiddler versions of the tunes. The singer adapts his vocal line to each different version. The entertainers are relaxed and at ease. Although the fiddler invariably repeats eaach section if it is a two-section tune, the singer is not obligated to sing the repeat. He may wait until the next time around.


Earlier in the book, Thede states:

With but one exception, the singers of the tunes in this collection were the fiddlers themselves, with my accompaniment on the fiddle. This exception was Louise Collins, daughter of a fiddler. All of the singers used some portamento and embellishment, the quality of the voice tense, pitched in the upper front of the mouth, and at full voice. [my note: Martha Louise Collins (1920-1998) was the daughter of W. S. Collins]


I'm a bit confused that Ms. Thede mentions the fiddlers sang to her accompaniment on the fiddle. That makes me wonder if she was playing with them after she took the tunes down and as they sang the lyrics, she continued to play. It's rather obvious the singers were men judging from many of the lyrics, such as the ones here, that are a bit derogatory towards women (albeit, a product of their time). The viewpoint here is definitely that of a man.

There is a home recording of Max Collins (1916-2001) playing Molly Baker (but it is called Big Tater by him), done by Gary Stanton and Tom Carter in 1976. The Collins family played many of the same tunes found in The Fiddle Book, though Max and his father W. S. weren't always the source fiddlers Thede collected them from. The Collinses often played those tunes a bit differently; indeed, Thede mentions that each fiddler seemed to have their own version of a particular tune, and that each would play it their own way.

Joining me in this "social distancing" video are Stephen Rapp on banjo (Kent, OH) and Sean Fen on guitar (Wooster, OH). 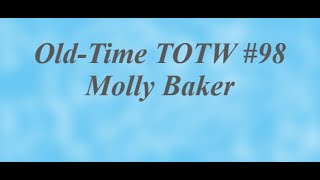 'Hi! new here, What are some good cheap options for a beginner?' 1 day