Please note this is an archived topic, so it is locked and unable to be replied to. You may, however, start a new topic and refer to this topic with a link: http://www.fiddlehangout.com/archive/53410

Not much is known about Strong's early musical life, but it is thought that he might have learned fiddle from Owsley County fiddler Moab "Dude" Freeman. Freeman was a bit of a vagabond and considered one of the finest fiddlers in that region. Donald Goodman, who knew the Strong family quite well, remarked that Strong played more like Freeman than anyone he ever heard. He said Strong had an extra long bow and "used every bit of it." Goodman said he was there when Strong began putting pennies under the feet of his bridge. According to him, they were at a local fiddler's contest and Strong said he couldn't compete because his bridge was too low, which was causing he strings to rub on the fingerboard. Goodman suggested placing pennies under the bridge to raise it up. Apparently Strong liked the sound so much that he kept them there. After all, he did win the contest playing on that doctored fiddle with the tune Sally Goodin! (source: Fiddler Magazine article by Bruce Green, 6/1/1997)

Alan and Elizabeth Lomax were in their final weeks of a two month trip to eastern Kentucky collecting and recording tunes and songs for the Library of Congress on 18 October, 1937, when they arrived in Buckhorn to record Strong. His daughter Fay answered the door, reluctant to tell them where her father was. Turns out he was in jail and had a wild night. Lomax went to bail Strong out to do the recording, and Strong had him get him some whiskey. He played 29 tunes in the presence of his teacher, fiddler Bev Baker.

Though the pitch was off on Strong's recordings (apparently due to Lomax's equipment), the played the tune in cross tuning, and most play it in AEAE these days. I tuned to GDGD for our recording.

Joining me is Stephen Rapp on banjo (Kent, OH). 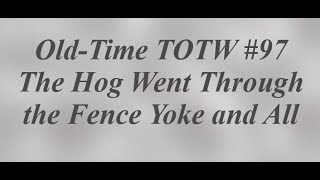