Please note this is an archived topic, so it is locked and unable to be replied to. You may, however, start a new topic and refer to this topic with a link: http://www.fiddlehangout.com/archive/53356

There is a discrepancy in Frank's year of birth. Milliner-Koken say "ca. 1880," and though his death certificate says 1887, he is listed in the 1880 Census as being 8 years old. Also, Milliner-Koken state that he died in Indianapolis, IN, but that is incorrect. His wife Elnora died there, but his death certificate confirms that he died in Nashville, Davidson Co., TN. His cause of death is cryptically listed as "Undetermined--Dead on arrival." (all above information from Ancestry)

Patterson learned much of his style and repertoire from a black fiddler around the year 1900. John Work III recorded him playing many tunes along with Nathan (Ned) Frazier on banjo and vocals in 1941. This was done to celebrate the 75th anniversary of Fisk University, an all Black institution of higher learning that was founded six months after the end of the Civil War. These recordings were not made available until over 40 years later, and can be found on the CD "Altamont, Black String Band music From the Library of Congress." Six recordings of Patterson and Frazier are included on the CD " Black Fiddlers (the Remaining Titles of Andrew & Jim Baxter, Nathan Frazier & Frank Patterson. The Complete Recorded Works of Cuje Bertram (1929-c. 1970)."

I found an interesting contemporary quote regarding the recordings Mr. Work made of Patterson and Frazier:

"We are very happy here at Fisk University to present to you and instrumental ensemble which plays the music of 40 or more years ago. The tunes you will hear played by these men are those Mr. Frank Patterson has been playing for 40 or more years and wre handed down by the player who taught him. This ensemble is the answer to a folklorist's dream. I feel apologetic for having so little time to say the things needed to be said about this combine. They easily offer the opportunity and materiel for an entire lecture alone."

The text continues to relate the function of the fiddle and banjo in the music, the fiddle being the "principal carrier of the melody," and the banjo "may reinforce the melody...embellish the harmony...may accentuate the rhythm...or it may perform all three functions simultaneously as you will observe in the playing of Mr. Nathan Frazier, Banjoist de Luxe." Frazier must have been a very prolific player, as he was noted by others as always having a banjo with him. (above quotes from A Tennessee Folklore Sampler, Selections from the Tennessee Folklore Society Bulletin [1935-2009], edited by Olson and Cavender).

Texas Traveler is a fun and interesting tune. To my ears, the A part is very much like Cumberland Gap, and the B part shows similarity to the A part of Apple Blossom. 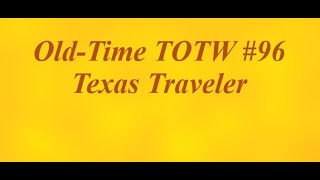