Please note this is an archived topic, so it is locked and unable to be replied to. You may, however, start a new topic and refer to this topic with a link: http://www.fiddlehangout.com/archive/53294

According to Wikipedia, some sources suggest Stephens was born before 1879, but my research shows that the 1880 Census lists him as being two years old. He was orphaned from a young age. His father is said to have died in 1880. Though his mother's death date is unknown, she is listed in the 1880 Census. Young John was raised by an aunt in Flatcreek, a small community located between Lynchburg and Shelbyville. When he was eleven years old, he bought a fiddle from a hobo and taught himself to play. He began playing at local dances in 1896 and played regularly at different events into the early part of the 20th century.

In early 1926, Ford Motor Company attempted to improve sales by capitalizing on the media success of Maine fiddler Mellie Dunham, who, in December 1925, made a Tuesday evening appearance at a Detroit ballroom of Ford's old-time dance orchestra. An experimental network of radio stations around the country was organized. Local Ford dealers were to participate by getting loudspeakers and inviting the public in to dance to the broadcasts. Ford dealers in Kentucky quickly organized fiddle contests. After capturing first prize at the Ford dealership in Lynchburg, Stephens went on to the Tennessee statewide contest in Nashville, TN, on January 19, 1926. Stephens won third place behind Uncle Jimmy Thompson and a one-armed fiddler from Hartsville named Marshall Claiborne.

The "Champion of Dixie" contest took place at Brown Theatre in Louisville, KY, on January 26 and 27, 1926. The three finalists from Tennessee competed against three finalists from Kentucky and two from southern Indiana. Stephens won second place behind Indiana fiddler W.H. Elmore, and, being in the top three, earned a trip to Detroit. On February 9â10, 1926, Stephens, along with Elmore and Claiborne, played at a banquet in Dearborn, MI, that was held during a convention of Ford dealers from around the country. Henry Ford was present.

After gaining notice from all of this, Stephens went on a tour across the Eastern United States, which included a guest radio spot in Chicago and several appearances at the WSM Barn Dance, later to be known as the Grand Ole Opry.

Candy Girl was recorded by Stephens on the Columbia label in 1926. The tune is traditionally played in the key of A, in cross A (AEAE) tuning, but Stephens was tuned slightly lower (as was usual for the earlier fiddlers). I am playing it in AEAE tuning, but I am tuned to a 415 A, which is only slightly above the recording of Stephens.

Subscribe to my YouTube channel and click on the bell icon to receive notifications for new videos. And be sure to join my Old-Time TOTW group on Facebook. There you will find information on remote private lessons and group workshops.

I will be rolling out remote workshops focusing on selections from the Old-Time TOTW series. The first is scheduled for Monday, April 27, 2020. See the Facebook group for details, or contact me at FiddlerPaul71@gmail.com for information. 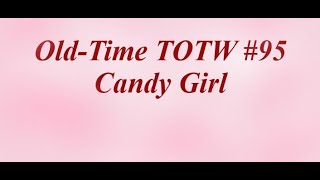 One of the great tunes of all time. I love it. Paul, you're playing of this tune really hits home. I've grappled with it a few times and seems to me there's just not much to it, on the surface, but the real trick here is to pull it all outta there without sounding contrived about it. I love the tune. Some truly impressive fiddling there!

Thanks so much, Peggy. Yeah, this is really one of those tunes where pulse and groove make a huge difference! Glad you enjoyed it!