Please note this is an archived topic, so it is locked and unable to be replied to. You may, however, start a new topic and refer to this topic with a link: http://www.fiddlehangout.com/archive/53252

This week's tune is Cacklin' Hen and Rooster Too from the playing of the Skillet Lickers of Atlanta, GA.

Gid Tanner formed The Skillet Lickers in 1926. Between 1926 and 1931 they recorded 88 sides for Columbia. Eighty-two of these were commercially issued. They disbanded in 1931, but reformed for occasional recordings after a couple of years with a changing line-up. The Skillet Lickers, helped make Atlanta and North Georgia an early center of old-time string band music, especially the hard-driving fiddle-based style employed by them.

The Columbia recording of Cacklin' Hen and Rooster Too consists of Clayton McMichen, Bert Layne and Lowe Stokes on fiddle, Gid Tanner on banjo and Riley Puckett on guitar. The source recording at the end of this video comes from Larry Warren at Slippery-Hill, slippery-hill.com/recording/ca...oster-too

Joining me in our recording is Stephen Rapp on banjo (Kent, OH), and Jeanie Creamer on guitar (Hocking Hills, OH). It was a fun and memorable weekend spending time with Jeanie at her home.

Subscribe to my channel and click on the bell icon to receive notifications for new videos. And be sure to join my Old-Time TOTW group on Facebook facebook.com/groups/331005451133333/
There you will find information about Old-Time TOTW remote workshops, remote private fiddle lessons, and much more. I can also be contacted at FiddlerPaul71@gmail.com. 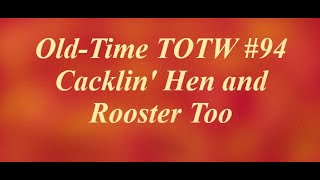